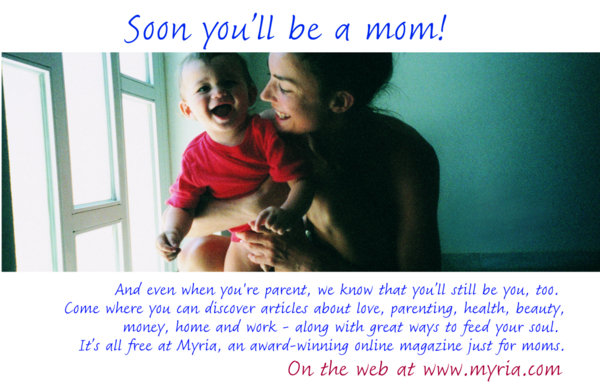 A woman doesn’t have to lose her identity when she becomes a mother. That’s what the women behind Myria Magazine (myria.com), a web site for mothers, believe. The site — created, financed and operated by two at-home moms — was profiled in the June 1999 issue of Redbook magazine alongside ‘net heavy hitters iVillage, Women.com and ThriveOnline.

Now the upstart is celebrating its first year online by giving away over $1100 in prizes. “Myria’s having a birthday, and we’re giving away all the presents!” says co-owner Betsy Gartrell-Judd.

The prize packages reflect the site’s goals and include treats to help women care for their families, take time for themselves, and to explore a variety of informational resources. Prizes include: A gift certificate for indulgences from Femail Creations, Lee Jeans, baskets of bath goodies, a collection of CDs, gift certificates from PlanetRx, Baby Universe and Genius Babies!, an Ark to the Future Time Capsule and more than $250 worth of books and free magazine subscriptions.

Entry details are posted on the Myria site. The contest runs through November.

Principals Nancy Price of California and Gartrell-Judd of Ohio, who “met” online after giving birth on the same day in 1996, designed Myria to bridge the gap left by web sites and magazines focusing exclusively on parenting or womanhood.

Instead, Myria addresses the rich life experience of a woman who is also a mother. Says Price, “Our hope is to deliver the best of both worlds: meeting our visitors’ needs as women, but never forgetting we share the joys and responsibilities of motherhood.”

Other Myria Media, Inc. properties include ePregnancy.com, a site for expectant parents; InteractiveParent, a new informational resource for parents; and SheKnows.com, a web directory featuring sites of interest to women.