New Web Portal Focuses on Internet Sites For and By Women

Walnut Creek, California and Circleville, Ohio – While most search engines are scrambling to index the whole of the Web, one site is instead aiming to exclude the majority of what’s on the Internet. SheKnows.com (http://SheKnows.com), a new Web portal debuting this month, intends to highlight only sites of particular interest to women.

With its comprehensive directory, SheKnows.com provides easy access to resources and information of value to women and girls online. Site visitors may browse links in a variety of categories; including art, business, health, hobbies, politics and parenting. 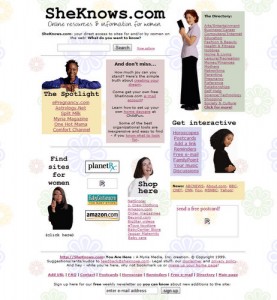 In addition to the directory — which already contains over a thousand categorized links — SheKnows.com provides free web-based e-mail, daily horoscopes, an e-mail reminder service, free e-mail postcards and a rotating selection of independent sites in the spotlight.

A dynamic resource, the site is updated daily, and all visitors to SheKnows.com are invited to add links to the directory as well as to rate their favorite sites. A newsletter highlighting popular sites and Editor’s picks is e-mailed to subscribers weekly. Designed with a female-friendly palette and vivid images, the SheKnows.com user interface creatively combines text with graphics to make the site as attractive as it is functional.

Myria Media’s other Web properties include ePregnancy, a site for expectant parents (ePregnancy.com); Myria, an online magazine for mothers (myria.com); and the forthcoming parenting information and community site, Interactive Parent (InteractiveParent.com). Among other honors, Myria was one of four Web destinations recommended by Redbook Magazine in June 1999, taking its place alongside multi-million dollar ventures Women.com, iVillage and ThriveOnline (Oxygen).

SheKnows.com is open now and ready to enlighten the fast-growing population of women on the Web. Visit the site at http://SheKnows.com. What do you want to know?