The birth of ePregnancy magazine (2002) 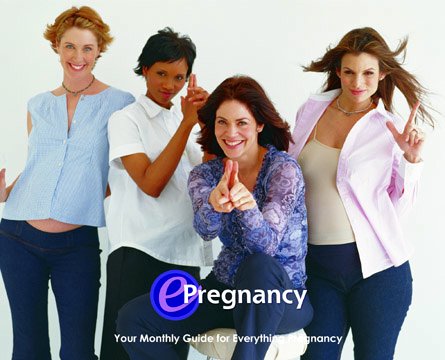 Majestic Media Pleased To Announce The Birth Of ePregnancy Magazine, The Print Spin-Off From The Popular Online Publication ePregnancy.com

PARK CITY, UTAH, June 13/PRNewswire/ — Nancy Price and Betsy Gartrell-Judd know a little something about pregnancy; they have seven children between them. These work-at-home moms are also the founders of ePregnancy.com, the popular online publication that has spun off a new print publication ePregnancy Magazine.

Published by Majestic Media, the magazine concerning “everything pregnancy” will hit newsstands this month with Price and Gartrell-Judd as the founding editors.

“Our new print magazine is a natural extension of the ePregnancy.com Web site,” Price said. “It gives us a chance to explore new topics and formats. This isn’t just a rehashing of information that’s already on the site. The magazine and the Web site are well integrated, but each is a stand-alone piece offering readers fun, precise and up-to-date information.”

Regular topics in ePregnancy will include fertility and preconception, fitness, nutrition, food and recipes, pregnancy health, beauty and wellness, preparing for birth, postpartum, baby care and the styles and fashions dressing moms-to-be.

“It’s going to be the most comprehensive pregnancy periodical on the market,” said Majestic Media Publisher Tony Golden. “We’ve taken a unique ‘mom to mom’ approach that will enlighten, entertain and energize parents-to-be, new mothers and those who care for them.”

According to Gartrell-Judd, the power of the pregnant woman will be integral to ePregnancy’s editorial direction. The first issue — which spotlights Liza Elliott-Ramirez as founder of Expecting Models, the only talent agency representing expectant and nursing models — will set the tone for the pregnant woman who is “doing it all,” while still preparing to be a mother.

“With career pursuits and other compelling reasons which can separate families over distances, many women no longer live near their own mothers in today’s modern society,” Gartrell-Judd said. ePregnancy will help prepare moms-to-be with all the strategies and insights that their own mothers might give.”

Majestic Media, under the leadership of publishers with a combined publishing experience of more than 25 years, has quickly become a new force in the magazine industry. The company has two new titles under its helm, including soon-to-be launched About You Magazine. Majestic Media is based in Park City, Utah, with offices in Atlanta, San Francisco, Columbus, Ohio, and Los Angeles.